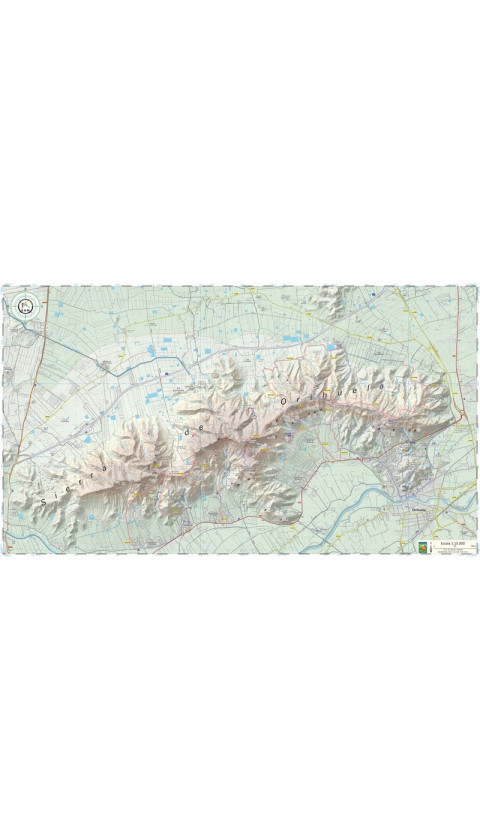 No reward points for this product.

- Delivery within 1 to 2 working days.

The Sierra de Orihuela is a mountainous alignment located between the southern limit of the province of Alicante and the eastern end of Murcia. It belongs to the Bajo Segura region, in particular to the municipalities of Orihuela and Santomera.

It has a varied and rich geo-diversity that makes it a privileged place for dissemination and teaching activities of geology. You can see folds, hot springs and remains of old mining activities of the Bajo Segura fault.

Through the Sierra de Orihuela runs the small path, approved and marked by the FEMECV, PR-CV 59, to which seven variants have been incorporated that allow access from several points of the northern and southern slopes of the Sierra. In addition to hiking, in the Sierra, you can practice other sports such as climbing and canyoning. The different ravines and climbing areas are marked on the map, differentiated into sports and classic climbing areas.

This 1: 15,000 scale map has been promoted, directed and reviewed by the Oriolano Montanismo Group.

The toponymy has been collected from the Sierra de Orihuela Map, ed. 2012, dedicated to the memory of José Tomás Rocamora Gracia, aka Pequeño El Pequeno, Oriolan pastor whose knowledge of the Sierra and its place names allowed its realization. The toponymy was reviewed and updated by E. Diaz, M. Martínez and T. Ferrández in the year 2000.

No reviews
Tap to zoom