By buying this product you can collect up to 1 point. Your cart will total 1 point that can be converted into a voucher of €0.20.

In two maps at 1: 30,000 scale the entire Road Network of the Baix Camp Region is represented. The Baix Camp Mountains are constituted by the so-called Gold Coast Mountains and include, among others, places as significant as the Prades Mountains, the Sierra de Llaberia and the ancient Barony of Escornalbou.

The road network of the Baix Camp consists of old royal roads, horseshoe roads, trails and also more current road and agricultural roads. They are roads recovered and maintained by the ‘Consell Comarcal del Baix Camp, the Town Halls and the Consortium of the Sierra de Llaberia, in addition to the collaboration of volunteers from the region. The roads of the Baix Camp network are marked as yellow marks, except when they coincide with sections of GR or PR where the FEEC itinerary marks are maintained. 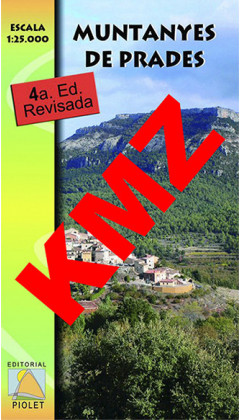